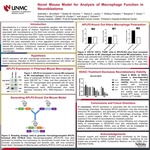 Novel Mouse Model for Analysis of Macrophage Function in Neuroblastoma

Background: Neuroblastoma is the third most common childhood cancer and accounts for 12% of cancer-associated deaths in children under the age of 15. Patients with high risk neuroblastoma have a poor 5-year survival rate of less than 50%. Neuroblastoma tumors treated with the histone deacetylase inhibitor (HDACi) vorinostat have increased infiltration of macrophages with upregulated immune cell-surface receptors. Neuroblastoma cells release VEGF and M-CSF, which may alter intratumoral macrophage populations. VEGF has also been implicated in alteration of amyloid precursor protein family processing. Our lab demonstrated that amyloid precursor protein 2 (APLP2), a member of the amyloid precursor protein family, plays an important role in the migration of tumor cells. APLP2 is known to be expressed by macrophages, but no studies have previously examined macrophage functions that are impacted by APLP2 in the context of neuroblastoma disease and its treatment by HDACi drugs.

Significance of Problem: Because of the high morbidity and mortality associated with neuroblastoma, studies such as this one that are designed to comprehend the interaction of immunity and treatment in neuroblastoma are clinically significant. The results from this study are also expected to expand our comprehension of macrophage function and regulation, and thus will be of broad value in the immunology and oncology fields.

Experimental Design and Results: We have treated neuroblastoma tumor cells in vitro with M344, an HDACi with structural similarity to vorinostat, and showed that M344 decreases neuroblastoma cell growth. In addition, we have generated mice that lack APLP2 expression in cells expressing the Csf-1 receptor (a protein characteristically expressed by macrophages and dendritic cells). We discovered that following polarization, macrophages collected from the bone marrow of these mice have an altered distribution of M1 and M2 sub-populations, which are macrophage sub-populations known to differ in their migratory capabilities. Furthermore, we have shown that M1 and M2 subpopulations of bone marrow-derived macrophages from normal mice differ in their expression of APLP2. Thus, APLP2 is influential in macrophage biology, and we have created a novel mouse model for defining its specific contributions in mice treated with HDACi that influence macrophage biology.